With our Yr. 3 and Yr. 5 students sitting NAPLAN next week, I have been very conscious of making sure we treat these assessments for what they are. They are an indication of where students sit at one point in time. There can be many variables that impact how students perform on these days. Often NAPLAN does not show the growth that we would expect. Some students do not perform in test situations; but can achieve great results when presented with problems in the way that they learn best. Each and every one of our students has special gifts – not all of them are displayed in a NAPLAN test.

Congratulations to Cassie Neiufi and her husband Sami on the birth of their beautiful baby daughter, Delilah. Mum and bub are doing really well.

It’s this Friday! I look forward to seeing our mothers this Friday. We will be serving breakfast from 8:15am. Please come along. Information regarding the flu vaccine

The flu vaccine is free for children. See link below for more information.

A reminder that girls should be wearing navy socks or tights with their Winter uniform. Thank you.

Open Week at STM is this week

If you have a child starting Kindergarten in 2022, we are enrolling now. On Sunday the Enrolment Mass for First Holy Communion was held. If you would still like to enrol your child please contact Father Emil or the Parish Office by emailing campbell@cg.org.au

If your Project Compassion box is still at home and you have money to donate. Please send the box into the front office by Friday so we can make our school donation to Caritas.

The Annual Parish and St Thomas More Forum Dinner to be held on Friday 25 June with Fr Frank Brennan. More information on this will be provided soon.

This week we celebrate Catholic Schools Week. The theme for Catholic Schools week is ‘Faith and Hope in the Future’. This week Madeleine Reid has been leading staff prayer, she has helped us celebrate the great opportunities we have at our school and the love, faith and hope that we all share as a community.

We held our first Mini Vinnies meeting for Term 2 last Friday.  We spent our time together talking over ideas for what we could work towards during Term 2.  Our Mini Vinnies have come up with the idea of a Free Dress Day at the end of the term, where each student would bring a gold coin to donate to a local charity.  We discussed what potential charities we could donate to and I have asked our Mini Vinnies to research charities in the Canberra area so that we can discuss them at our next meeting.

Our next Mini Vinnies Meeting will be Friday 14 May (Week 4) during playtime.

Please feel welcome to visit or contact me on 6249 8869 or send an email to brenda.galvin@cg.catholic.edu.au should you or children need anything. 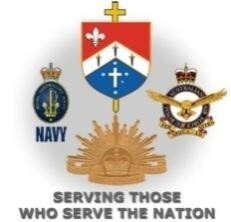 Thank you to all the parents and family that were able to attend our ANZAC Day Liturgy on the 23rd of April.  This year our Liturgy focused on the 100 Year Anniversary of the Royal Australian Air Force.  I’d like to give a special thank you to Blake and his father, Petty Officer Daniel Joost, who delivered our Reflection this year.  Blake reflected on the service of his mother, Flight Sergeant Sarah Joost, who was unable to attend our Liturgy due to her work commitments.  Blake spoke beautifully and shared some wonderful sentiment about what it means to be a defence student. Thank you also to Tamara and her father Wing Commander Daniel McManus who read the Peace Prayer.

A special thank you to our St Thomas More’s students who spoke beautifully during their readings.  I know it is sometimes hard to get up in front of the whole school and speak but they were all exceptional and should be very proud of themselves.

We were once again fortunate to have a Catafalque Party from Australia’s Federation Guard and Bugler from the Band of the Royal Military College Duntroon at the Liturgy. It is a special honour to have these serving members participate and we appreciate their continued commitment to or school. St Thomas More’s Primary School has been invited to attend the Battle for the Coral Sea Commemorative Service at the Australian-American Memorial at Russell Offices on Friday 14 May at 11:00am.

This year marks the 79th Anniversary of the Battle of the Coral Sea. This battle holds great historical significance as a turning point of the course of the Second World War (1939-45) in our region and for the development of Australia’s relationship with the USA. The Australian-American Memorial is “The Eagle” on the column at Russell Offices. This prominent monument was opened in 1954 by Queen Elizabeth. It was funded by the Australian public to pay tribute to USA service personnel who died fighting alongside Australian troops in the Pacific during the Second World War and recognises our on-going close relationship with the USA.

Our craft group is up and running on Thursdays in the library during playtime.  There is also our craft group on Tuesdays for students with a parent away, whether it be on deployment or course.  I am also including in this group any students who might just need some quiet time during lunch or feel they are needing a little help settling in.  So please let me know if you would like me to invite your child to our Tuesday craft/Lego sessions.

Please feel welcome to visit me at school or contact me on 6249 8869 or, alternatively, send an email to brenda.galvin@cg.catholic.edu.au

St Thomas More's has introduced a new online portal called Compass. The parent Portal allows parents to receive information about your child’s school and their progress. It will give you access to school reports, messages, classroom blogs and the ability to submit attendance notes. The portal is accessible via the web and the Compass School Manager App (via the App store on your device).

This Parent Portal will make engaging with your child’s school faster, easier and more secure.

Login Id's have been sent to all parents. If you have not registered you will need to do so as the schoolzine absentee app will cease to operate.

WHAT YOU CAN DO If you require any assistance, please contact Julie Ogden in the Front Office on 6249 8869 or email julie.ogden@cg.catholic.edu.au

After the pandemic put paid to any celebrations of Mother’s day last year, Year 1 is looking forward to hosting an extra special Mother’s Day breakfast for the whole STM community next Friday 7 May from 8.15am to 9.00am.

While we may not be able to travel, Year 1 is bringing the international to us with a special visit from Le Petit Breton who will be whipping up piping hot crêpes to warm up your autumn morning. Hot tea, coffee and poppers will also be served and children will be able to collect a rainbow rose courtesy of the one and only GG’s flowers to give to their mother, grandmother or carer. The cost of the breakfast is $8 per family and can be purchased through the QKR App. Raffle tickets are also available on QKR for $5.00 per ticket, limited to 1 per family. We look forward to seeing you there.