Careful consideration has been taken in reviewing the fees for 2021 to continue to support our school’s requirements whilst keeping increases manageable for families in the current economic environment.

Our fee combines tuition and school levies and will help to keep pace with rising salary and costs to ensure our school continues to deliver the quality education for our students that you would expect. The School Community Council has agreed not to raise the school and student resource levy for 2021.

Please see below the schedule of fees for 2021.

As always, if fees create financial concern for you, I encourage you to make an appointment with me to discuss how we can help. It is a policy in the Archdiocese that no student should be refused enrolment, excluded or disadvantaged because their family is unable to afford fees. Any discussion on fees would be strictly confidential.

If you have any questions regarding school fees for 2021 please contact me.

Nicole Mikkonen, our Assistant Principal, will be taking leave as of Monday. Nicole will return to STM in Term 4 next year. Interviews for the Acting Assistant Principal have taken place and I hope to inform you in next week’s newsletter as to who will be replacing Nicole. I’d like to take this opportunity to wish Nicole all the very best whilst on leave and I look forward to welcoming her back late next year.

At 11am on 11 November 1918 the guns of the Western Front fell silent after more than four years of continuous warfare. This year marks the 75th anniversary of the end of the Second World War. As the world welcomed peace, thousands returned home to much fanfare, and their loved ones. Thousands more never made the journey home. Next Wednesday the school will gather for Remembrance Day. Unfortunately, we cannot have parents in attendance this year. Brenda Galvin will run the liturgy.

This Friday we will hand out affirmations to students who make a positive contribution to our school.

The last day for Library borrowing for the year will be on Friday 27th November (Week 7). This will allow time for Library loans to be returned, a stocktake to be completed and organisation of resources for next year.

Please have a look around at home if you receive an overdue loans notice. We will ask that any book loans that are less than 12 months old be replaced or reimbursed.

Book Week this year was quite confusing yet fascinating at the same time. This year, Book Week was spread over two weeks. My school hosted many fun activities including, dressing up and entering a parade, baking cupcakes and attending the Mad Hatter Tea Party. Now that was fun!

On Friday we had the Book Parade. The Book Parade is where you dress up as a character from a book. You parade with your class and show yourselves to the rest of the school. This year, I dressed up as Little Red Riding Hood, but I wasn’t the only one with the cool costume. Mrs. Tarleton was! She dressed up as the Queen of Hearts, which I think is pretty cool. Oh, and Mrs. Reid dressed as the White Rabbit and she really got into character!

The following Monday was the Cake Stall. Year 5/6 baked all the cake and brought them in for the students to eat. I didn’t bring in any money, but Mrs. Ogden is such a nice person, she lent me $2!! Each cake was decorated with a book theme. I chose the cake based off the book, The Tale of Magic. It was quite tasteful, but it did make me sick. I guess some actions have consequences!!

On Thursday, we had the Mad Hatter Tea Party. At the party we had popcorn and poppers and we read to the Kindy’s. We also went on a scavenger hunt and made

nature art. Nature art is where you create something out of sticks, leaves, flowers and more. I thought it was fun. I was one of the lucky ones because I got to do it all again with Year 2. During the Mad Hatter Tea Party, I learnt that I have a lot in common with other people.

To sum up Book Week, this year was really enjoyable. Even though there were a couple of challenging parts, I got through them. I loved all the activities, but my favourite part by far was the Book Parade. 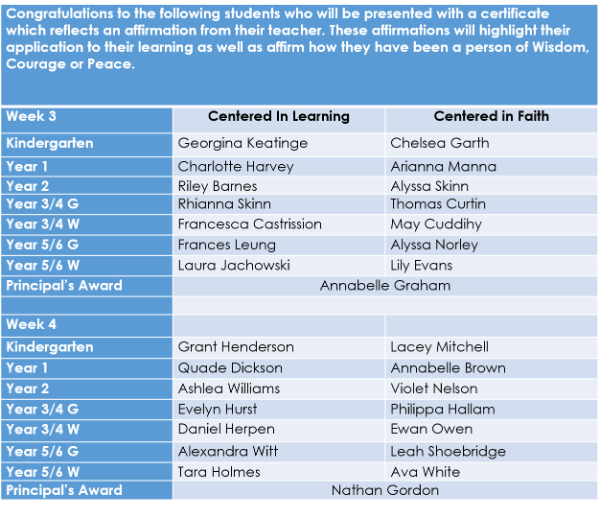